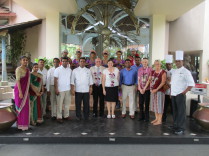 Once again we must thank the Management and Staff at the Royal Palms Beach Hotel, Kalutara for the hospitality we received throughout our three week visit in September/October 2016.

On this visit we were accompanied by my sister Glenda and husband Roy and they too would like to pass on their thanks for a wonderful time.

This year we visited a number of places, sightseeing, collecting model buses and meeting people.

At the Royal Palms Beach Hotel following our arrival we attended their 20th Anniversary Celebrations and were also involved in the Annual Christmas Cake making, attended a special outside dinner in front of the Beach for Repeaters to the Hotel and the Hotel also arranged a special media day on the 7th October - see pictures below.

Special Outside Dinner on the Beach for Repeaters - 7th October 2016