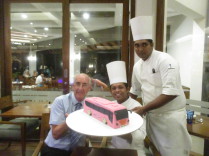 As has become tradition Geoff received a special "bus" cake from the Royal Palms Beach Hotel on the occasion of his 66th Birthday on the 6th October 2016.  This must have been the biggest birthday cake we had ever seen.  Unfortunately though as Media Day was to be the following day he was not allowed to cut it onthe actual day as it would be needed for the filming on media day.  However he did also receive another small chocolate cake which he could eat on the actual day.