It is with great sadness that Geoff, Linda and their boys Nick and Richard have received the recent news that their very close friend for over 40 years, Bill Whittaker of West Bromwich passed away on Friday 23rd November 2018, aged 78 years.

Bill was very well known for his Coach business Whittaker Coaches/Whittaker Tours of Hill Top, West Bromwich, from which he retired a few years ago.  Most people I am sure will remember him and his family from the Transport Shows and his enthusiasm for the Buses and associated Fairground Rides that he provided at our Transport Shows and many other local events across the Midlands including being based at the Sandwell Valley Country Park for a number of years.

It was good to see so many people paying their respects to Bill including family, friends and past business related colleagues including representatives past and present from Sandwell Valley Park Farm.  Bill certainly had a good send off which was well deserved.

See below some pictures of the beautiful and appropriate floral tributes including both his Bedford OB and General Bus. 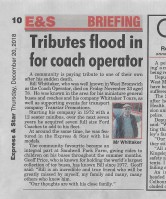 A common interest in buses brought Geoff and Bill together way back in 1977 when Bill was running his Coach business Whittaker Tours. Bill started his business in May 1972 with a 12 seater Minibus and in the next seven years he acquired seven fullsize Ford Coaches to add to his fleet.  Geoff was featured in the local Express and Star newspaper with his models and following a meeting of the two a close relationship continued over the years to the very end.

At weekends he was attending carnivals, transport and steam shows plus  lots more events with his miniature buses, inflatables and strikers and was known to thousands of people who rode on his miniature buses.  He also used to bring along his fullsize 1949 Bedford OB JXU 548 which he purchased in 1985 and sold April 2002 as well as a 1952 Bedford ML reg no:  FJT 86  which he bought for his partner Patricia who was always with him at the events.  He also purchased a 1992 built replica Tram for Island Coachways, Guernsey in 1996 and sold this in 2001.

Another old vehicle he took around the shows was a 1958 AEC Reliance KUV 778 which he purchased in 1988 and later sold to Black Country Tours.

When plans for the Sandwell Historic Vehicle Parade and Show began way back in 1977 to take place in Dartmouth Park, West Bromwich the following year (1978) Bill was one of the first to offer his help and support.  This led to Bill being involved over many years with his Buses and later years his inflatables and miniature replica buses were a regular attraction down Sandwell Park Farm.  He also attended all the Midlands Transport Shows organised by ourselves over approximately 30 years and was always on hand for publicity pictures with his vehicles for the media.

Geoff’s recollections with Bill are far too many to list but over the years they travelled hundreds of miles using his van and trailer obtaining miniature buses for Geoff’s collection and also Geoff went with Bill when he bought a number of his vehicles.  Trips for Geoff included Wales for a coin operated open top tram – Blackpool for replica Wall’s Ice-cream Balloon Tram; a visit to Wiltshire in 2000 for a Belgium Fairground Bus from the 1950’s – this we managed to fit in the van and get back to Bill’s yard but is still awaiting restoration 18 years later as we couldn’t get it through the gate at our property at the time;  another visit was to Great Yarmouth seafront for a coin operated cartoon bus;  and a long trip to Bere Regis to collect Harrington Miniature Coach BCM 50.   Geoff could go on, as most of these did not always go to plan, but they are all great memories we shared together many times over the years.

Bill was also involved on a number of occasions with our TV and Film commitments including Allsorts for Channel 4 in January 1997 which was filmed at our then Tividale home with Kevin Duawli and Geoff then took the crew and presenter up to Bill’s yard and they photographed and filmed the miniature buses and also Bills Tram.   Romeo Brass was filmed at Calverton, Nottingham and at Chapel St Leonards, Lincolnshire in October 1998  and in January 2000 Geoff and Bill along with two of our miniature coaches and Bill’s Italian Coach went to the TV studios in Elstree, London along with hundreds of model buses for a feature on the children's TV programme, Blue Peter and we were both awarded our Blue Peter Badges.

On 1st July 2012 Bill lost the love of his life, partner Patricia, but he soon managed to continue doing what he always did best, attending Shows with his buses and providing children's strikers, castles etc at many events including those at Sandwell Valley.  He was regularly assisted by three of Pat's sisters, Linda, Jane and Angie who not only provided family support at events but looked after and out for him on a daily basis to the very end.  We had the pleasure of knowing Pat and her sisters as they had been attending our events along with Bill over 30 years+.

During Bill’s time in coaching on his excursions to the coast and tourist attractions he was always on the look-out for items for Geoff’s collection and located hundreds of models over the years, making many telephone calls checking Geoff’s model listings before purchasing and this continued right up to a few weeks before he passed away.

An incredible and true friend who will be greatly missed by Geoff, Linda and family and many many others who knew him.  Our thoughts are with his close family. 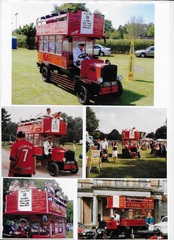 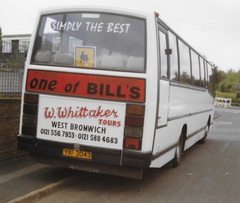 The photographs and newspaper cuttings used in this Tribute to Bill Whittaker are from our archives (Geoff and Linda Price) and many were taken at our Transport Shows over the years.  Many by ourselves but others by freelance photographers on our behalf.   It has been difficult to select from the thousands of photographs we have in our archives from over 35 years+ events.